Big Boy (2011) takes place in the aftermath of the second world war, in Middle of Nowhere, Mindoro. The opening credits roll to the sound of 1950’s radio adverts, then cut immediately to water dripping into a milk can, and then what the censors would refer to as a “pumping scene” between a couple we will later find out are the parents of our protagonist: Julio, aka Big Boy.

Julio is the eldest in a brood that grows far too large to adequately sustain itself, and thus becomes not only the guinea pig but the poster boy for a growth serum that will serve as the family’s antidote to its despondency. Julio’s parents cure “cod liver” oil from fish guts in a makeshift lab, its effectiveness proven only in photographs that portray him as taller than average.

From a review by Noli Manaig

His growth spurts are notched on the bamboo poles supporting the family nipa hut. This way, approval from his father seems welcome, but Julio must pay for it according to the strictures of scientific method. His siblings run free; he has grown distant from the village. He seems mute, wearing a doleful look. Julio has become Big Boy, the mascot of his father’s entrepreneurial spirit, deep in the fastnesses of Mindoro. One day he stops growing.

At the beginning of Big Boy, the family finds a parachute filled with canned goods, vitamins, and other basic commodities “mysteriously” caught in a tree on their property. What should have been a source of temporary relief becomes a sole means of survival for the family, who increasingly derive a sense of value and dependency on American products and doleouts, which later becomes an obsession with a largely misguided reading of the American dream. Fixations on height, mestizo features, and U.S. Surplus goods abound in a plot that is slowly driven forward by the promises that await elsewhere.

END_OF_DOCUMENT_TOKEN_TO_BE_REPLACED

I was listening to a lot of Grizzly Bear’s earlier work when “Two Weeks” came out. I know I’m not alone in reading this album as meditations on leaving and the perils of codependency, like most of the band’s work. When Veckatimest leaked, I was at a shitty time in my life, working a shitty job which I had taken in fear that there would be no more shitty jobs left to take after I graduated. Three months into said shitty job, I quit, went on vacation for a month with what I had saved, and saw Grizzly Bear play live.

Unfortunately, I didn’t get to see them play this song, because Mew were playing at another stage on the opposite end of the park. I like Mew. I can’t say I like them more than Grizzly Bear, but a boy I liked also liked Mew. I had a boyfriend, but this other boy was present every day, asking how my day went. And this was a time when the only consistent presence in my life was the friend whose couch I was surfing.

Being in transit tends to reduce the people you left behind, to flatten them, so maintaining any kind of contact becomes extremely relevant. It’s all you can bank on to add a dimension to someone who is otherwise just a primordial mass in cyberspace. With a backstory. I had met him at a gig about a month back, and despite living in the same time zone, we were an ocean apart. I had never believed in long distance relationships, and didn’t bother to ask at the time how he felt about it because I had a boyfriend.

END_OF_DOCUMENT_TOKEN_TO_BE_REPLACED 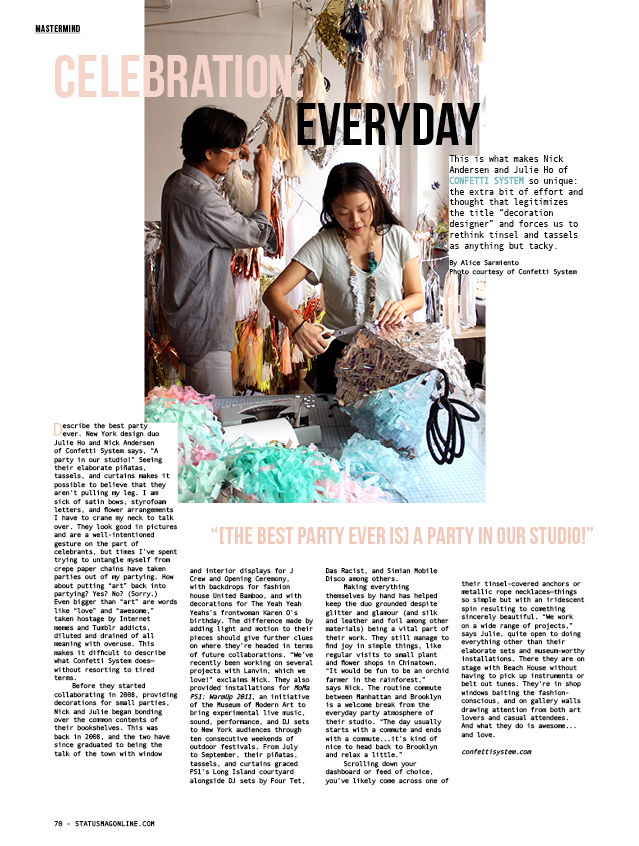 I realized last week that I can’t remember what my prom date looked like. I can remember her name and hair color, and the color of her dress, but when I try to summon the contours of her face I get stuck, and I’m left only recalling the basic outline of her silhouette. I was never in love with the girl, nor do I have any real interest in finding out, say, where she lives now or what she does for a living. But I can’t help feeling a twinge of sadness at the fact that I’ve almost totally forgotten a person who was once important to me.

from this month’s 30 Days of Good challenge.

I was talking to my best friend about that wonderful sense of emancipation that comes with living from moment to moment. Over time, travel has become like a drug that I use on occasion to numb the feeling that I’ve leased my life to the gravity of a tenure-track position. If there’s anything I’m afraid of, it’s that day when I won’t be able to tell the difference between recreational use and a full-on addiction. While living from moment to moment is nice, I’m pretty sure we’re all looking for something more infinite.

You meet people, you bid farewell, and confine them to those final glimpses, leaving no more than impressions on the entire landscape of your memory. What happens when you want to keep some of these people instead of returning to the (let’s admit it) wretched land mass that spat you out.

I would like to think we all have choices in these matters, but not all of us are given that luxury. Most of the time we have to leave these people while we wander back into our own little versions of the infinite; while we continue the narrative.

On a lighter note, it makes me happy every time I see the words “Master of Art Studies” beside my name on our school’s online registration system.