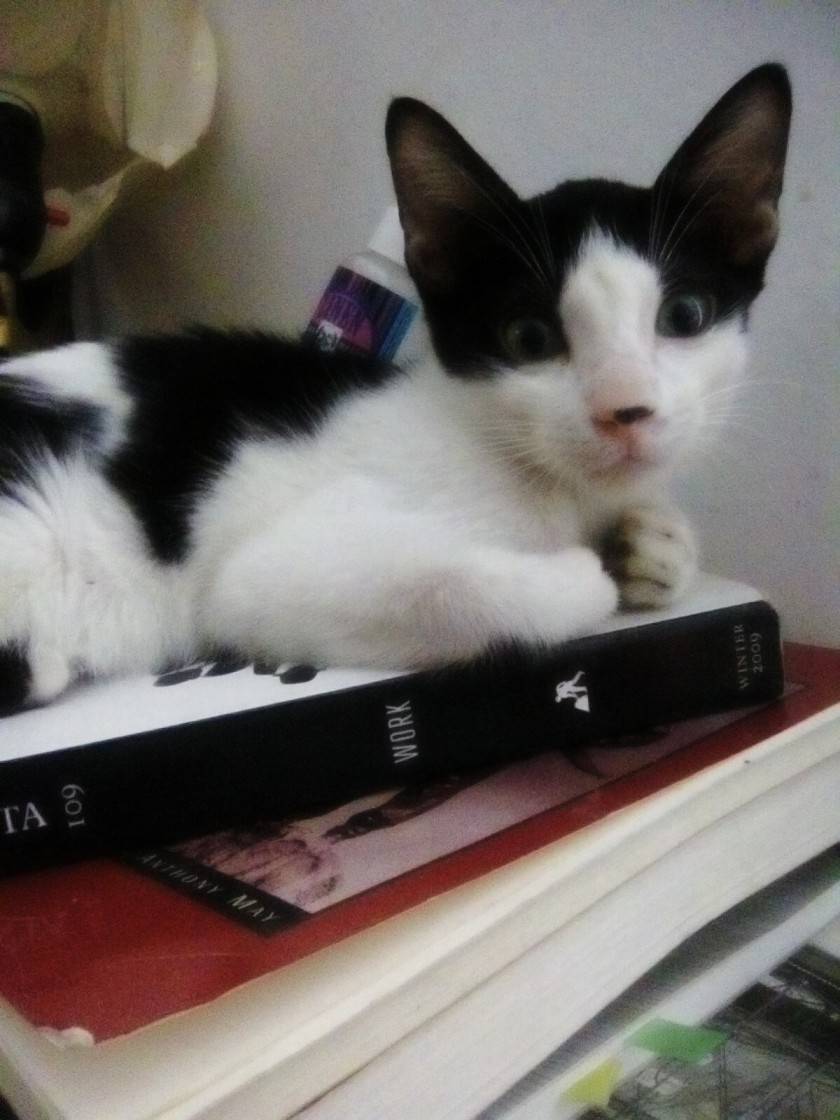 One of my kittens, Porky (aka Paul, Jr.) died last week while I was in Malaysia. The first message I received upon landing was from my Mom, expressing her regret at having to be the one to deliver the sad news.

I try to give all my cats fair attention, but I somehow overlooked whatever had been ailing Porky. Right before I left, he was finally vaccinated, after a long wait due to his frail health. Nicknamed for his flaring nostrils, Porky had already been confined when he was very young for respiratory problems that prevented him from putting on weight–despite his having been pudgy as a newborn kitten. He was born in December, and being the only tuxedo in Paul Stanley’s litter of three, became her Junior. He was a sweet kitten with a kind face and big inquisitive eyes. This picture is of him perched on the pile of books that passes as my nightstand. This is the view I often woke up to when he was still living with me, before I had to leave him with my Mom, who cares for my cats whenever I’m away.

I was so busy before leaving for that last research trip–this time going from KL to Penang to Sabah, and back to KL to wrap-up. Little Dot had fallen very ill, and to this day she still hasn’t fully recovered. She still can’t walk. While Porky was never the liveliest in the clowder, none of us saw it coming. Still, I can’t help but feel sad, despite the urgency to keep going. Small animals by default lead small lives, and his whole world was limited to my apartment, his vet, and my mom’s house. I would have wanted him to see beyond that, but all I can hope for at this point is that he at least felt loved while it lasted. I wish he had known that if I could have been there to cradle him as he passed on, I would have been there.

But if life goes on after the loss of a human being, what more with a six month old kitten? There’s essays to be written, exhibitions to hang, places to go, people to meet, etc. Not that my cats give a shit about these things, which is precisely why their company provided so much comfort. With them, it was all about food and naps and time slowly being emptied out.

A sick cat on the other hand is all about grief and worrying and “why can’t she stand?” But it’s also about the tiniest, most incremental improvements: warm paws, color restored to their noses and ears, finishing their food. Now that Little Dot can lift her head, I feel like celebrating.

Mom assures me that he went peacefully and that he was buried properly, and that’s really the least we can do to recognize that a life was lost, however small. It still angers and frustrates me that so little is expected of us when it comes to the way we treat the other beings that we happen to share this world with–and how quick we are to abuse this privilege, this belief in what we’re owed by virtue of being human. And how undeserving we are of the title.

Rest in peace, Porky. We really did our best to give you a good life.

One thought on “It goes on”