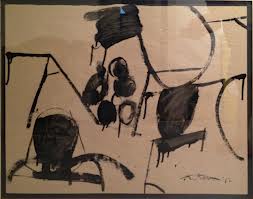 Writing In Praise of Shadows in 1933, Japanese novelist Junichiro Tanizaki compares the use of paper in the Western modernist tradition to that of the East, claiming that “Western paper is to us no more than something to be used, while the texture of Chinese paper and Japanese paper gives us a certain feeling of warmth, of calm and repose…Western paper turns away the light, while our paper seems to take it in, to envelop it gently, like the soft surface of a first snowfall.”

There are no claims about the geocultural origins of the medium used by Angelito Antonio, however the same can be said about the capacity of these pieces to evoke warmth by taking in the light. On paper, the tip of a brush, the weight of a hand, and an inky pigment come together as a series of strokes.

Compared to his past works, what is most obvious in this series is an absence of colour; but there is no lack of texture, as the weight of narrative bears down more heavily through the impressions left by black oil on white paper. In the language of art, black and white is typically used to make an impulse visible. As a streak or a gash, black drives the point home, while leaving room to risk an idea. Similar to sketches, this series treads between the abstract and the calligraphic; lending themselves more easily to storytelling.

Like music notes or lines of poetry, Antonio’s brushstrokes show equal parts luck and intention, with the multitudes that a story of a life well lived can contain. Running across the aged page, the lines sketched before us appear light and airy; and yet, the impressions left by pigment on paper signify that these aren’t sketches, but fully-formed ideas, communicating that Angelito Antonio has said what he has come to say.